Lower extremity venous diseases or insufficiency include clinically deteriorating conditions with morphological and functional alterations of the venous system, including venous hypertension, vascular wall structural abnormality, and venous valvar incompetency in association with an inflammatory process. In fact, the same pathophysiological processes are the main underlying mechanisms of other venous insufficiencies in different vascular territories such as Peripheral Varicose Vein (PVV), varicocele, Pelvic Varicosities or Congestion Syndrome (PCS) and Hemorrhoidal Disease (HD). Regarding the anatomical continuity of lower extremity venous system, urogenital system (pampiniform plexus in male and broad ligament and ovarian veins in female) and anorectal venous system, it is reasonable to expect common symptoms such as pain, burning sensation, pruritis, swelling, which arise directly from the involved tissue itself. High coexistence rate of PVV, varicocele/PCS and HD between each other underlines not only the same vascular wall abnormality as an underlying etiology but also the existence of common symptoms originating from the involved tissue in dilating venous disease. Accordingly, it might be reasonable to query the common symptoms of venous dilating disease in other venous vascular regions in patients with complaints of any particular venous territory. 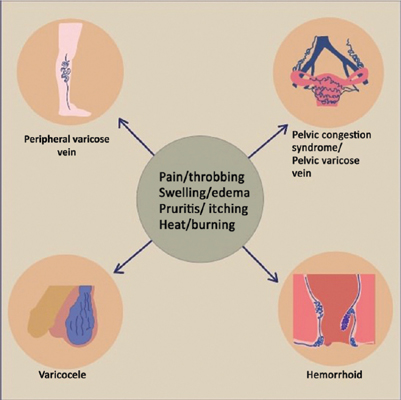